Donald M Street, who arrived in St Thomas in the US Virgin Islands in November 1956, is the compiler of the Imray Iolaire charts which cover all of the eastern Caribbean east of Aruba, and is author of guides covering the same area. Over the past 70 years he has built up a tremendous knowledge of how hurricanes affect the yachting industry in the eastern Caribbean

COULD YOUR BOAT WITHSTAND A HURRICANE?

DON'S HURRICANE EXPERIENCE
Don Street's first experience with hurricanes was the 1938 hurricane that cleaned out the yachting fleet of Manhasset Bay(where street grew up and learned to sail) by putting ashore or sinking 400 boats. Further east in the Watch Hill, Westerly RI area, it killed 485 people and caused in modern dollars 1.4 billion in losses. It wasone of the most destructive and expensive Atlantic hurricane of all times until Sandy2012 tore New York city and suburbs  apart
Sandy did  more  damage so was  more expensive but  the loss of  life was  lest than 10 % of the  loss of  life  in the  38 hurricane.

Then the 44 hurricane , which NOAA refers to as "the great storm" hurricane force winds in a 600 mile circle sinking a US navy destroyer, a light ship, two coast guard cutter and ? cargo ships carrying supples to Europe. Well more than 300 seaman  must have lost there lives as 276 were lost  when the  destroyer sank. Thus in loss of  life these two hurricanes were the most destructive atlantic hurricane in  history.

Damage  ashore  was not that bad It severely damaged but did not clean out the Manhasst Bay yachting fleet. Snipe number 3 owned by Don Street and his three older sisters survived, but damaged. Street at age 14 filed his firm marine insurance claim as a result of hurricane damage.

Read more
TROPICAL HURRICANES AND THEIR INTERNAL TORNADOES
Tropical hurricanes start as a low pressure wave in the region of the Cape Verde islands. Some lows pick up a circular motion and are almost immediately noted by NOAA satellite and given a name. They are then carefully tracked by NOAA/hurricanes with the positions given every six hours.

After being caught in 1984 on the north side of St Martins by late season , mid november hurricane Klaus and surviving using six of Iolalire's seven anchors,(click here for full story) I decided that I had to do some research. Klaus was the first hurricane anyone could remember that headed NE in the low latitudes.

click the above link to down load the file tropical hurricane, their tracks the antilles, their strength and internal tornadoes 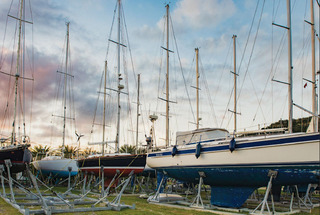 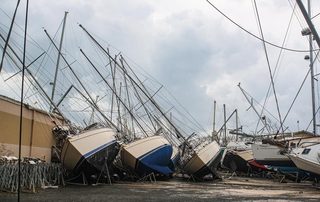 SHARING KNOWLEDGE
2017's hurricanes devastated boats both in and out of the water. If your boat is in the Caribbean, Don Street advises on how you can keep it safe and continue to sail during the hurricane season
An area from west of St Barts to the east coast of Puerto Rico is often called Hurricane Alley, because the islands in the area have over the last 35 years frequently suffered either a direct hit or major damage by a hurricane that has passed close by.

With two exceptions, none of the yard managers have laid up boats during hurricane season in such a fashion that they would stand a very good chance of surviving a hurricane.

The yard attached to Marina Puerto Del Rey had 237 boats properly laid up: tied down, well supported by screw jacks, masts out, no total losses: just three per cent suffered major damage during 2017.

In St Martin, Sir Bobby Velasco says: "I lay up my boats the way my daddy taught me: wooden cradles, everything tied to together with cross spalls, well nailed together and masts out". Boats in Bobby's marina survived undamaged except for sand blast damage from hurricane-blown sand. Elsewhere in St Martin, where boats were hauled ashore there was massive destruction.

In marinas in hurricane alley in 2017, outcomes varied from massive destruction, to many boats sunk, to no sinking but major damage, except Marina Puerto Del Rey. Puerto del Rey with its 12ft-high 1,000ft-long breakwater was specifically built so that boats would survive a direct hurricane hit to the marina. The marina has a total capacity of 950 boats, of which 552 were in the water. Just 4% suffered major damage, 2% were total losses.

As a resut the marina became very popular and  filled almost to full compasity.In 2019when Dorina approached therewere only 45 berths aailable to boats wishing  to shelter  from  Dorian.

In the islands to the south of Hurricane Alley – Antigua, St Lucia and Grenada, where large numbers of boats lay up ashore for the hurricane season – the marina managers claim they have learned their lessons by observing the disasters: Antigua as a result of Hugo, Grenada as a result of Ivan in 2004. They lay up boats properly so that they will survive a hurricane.

Fin-keeled, deep-draft boats have their keels in a pit, boats are in specially built steel cradles or are very well chocked by numerous screw jacks, and boats are tied down with straps to either dead men buried in the sand or sand screws.

But the vast majority of the boats are stored with their masts in. Wind pressures go up with the square of the velocity. When the wind gusts to 180mph the wind pressure is astronomical: 83lb per sq ft. That means that on a 60ft mast with the wind gusting 180 mph, the load exerted 30ft above the deck is 5,450lb. When the wind is fore and aft, or near to it, this load really does not matter. But with that load on the beam, will the boat stay in the cradle?

Every time a hurricane passes through hurricane alley, boats pour into supposed safe havens, such as Ensenada Honda on Culebra, Hurricane Hole St Johns, or inner Benner Bay on St Thomas. In every major hurricane they are disaster areas with a total of well over 100 boats sunk, and a similar number suffering major damage.