"In today's electronic world, professionally produced sailing DVDs put the information you've paid for in the palm of your hand. Transatlantic with Street, shot aboard veteran seaman Don Street's engineless 1905 yawl, Iolaire, is on a different tack altogether. Shot in the mid-1980s on a passage from Europe to Antigua, it reminds us that seafaring can still be rough, tough and wildly at odds with today's well-organised ARC crossings. The boat leaks through the deck and through the bottom (it's easy to forget that wooden boats generally do). The hands become disillusioned and some defect, leaving the faithful with the traditional task of signing on volunteers in remote places. Whales accompany a remarkably fast trade wind passage, and we share the wonders of the deep as the crew navigates by sun and stars. The real magic, however, is the seamanlike wisdom of "Squeaky" himself, contrasted with the quiet, scholarly voice of his acolyte, Gavin Shaw. Shaw ends the movie inspired to roam the seas in his own right, as might we, the viewers. There's nobody quite like Street, and this DVD, two hours of thought-provoking viewing, is worth every penny." -- Tom Cunliffe, Sail Magazine DVD review

"Streetwise Tips" How-to Sailing Videos
Don's "Streetwise" tips were a popular feature in the Sailing Quarterly video magazine back in the 90s. The idea was to help make sailing easier, safer and more enjoyable. Don's seamanship advice is as relevant today as ever it was. Don has well over fifty years of offshore sailing experience, much of it on his 46' engineless yawl "Iolaire" built 1905. With no less than twelve transatlantics and almost forty trips between the Caribbean and the States, Street's seamanship is second to none. Cruising, racing, exploring and writing about the Caribbean, the Mediterranean and northern Europe, has given Don a vast fund of good solid information that is timeless in its relevance.

Streetwise Tips: Vol. 1 - Heavy Weather Sailing"
In this DVD Street deals with the serious subject of heavy weather sailing. With so many ocean passages under his belt, Don certainly knows what he's doing when the going gets tough. Other topics include the correct way to cleat lines, tying sheets, the use of the Tow Boat Hitch, known in Britain as the Lighterman's Hitch, jibe prevention safety measures and coastal navigation. You can also join Don on two cruises. The first is Venezuela in the pre-Chavez days, one of the most beautiful
cruising grounds. The second is the incomparable southwest coast of Ireland.

Streetwise Tips: Vol. 2 - Anchoring & Docking
In this how-to video, Street's tips cover single line docking, chafing gear, snubber lines and getting off once you're aground. In addition the disk includes Don's advice on knots, whipping (both simple and sewn-on), stitching sails, mainsail furling systems,
kneeling when working on deck to increase your safety and sailing with kids. You also join Street on a cruise through the Grenadines. While cruising the windward side of Carriacou he picks up a bottle of "Jack Iron". In one of the funnier scenes to
be found in a sailing DVD, Don shows how ice cubes float in Mt. Gay rum, but sink like stones in Carriacou Jack Iron rum. Don rounds off the demonstration by taking a slug of Jack Iron which literally brings tears to his eyes!

"Don Street - Sailors' Knots" How-to Video
Don thinks crew should study this DVD because good line throwing can rescue a bad landing while a potentially good landing can be ruined without it. As well as the 8 basic knots, Don adds advanced ones with unique benefits. Halyards, sail stops and chafe repairs are also covered. Don's close up and slow motion demonstrations make it easy to learn this vital but difficult subject.

"Don Street - Antigua Race Week" Documentary
An award-winning film from Antigua Sailing Week '85, "Iolaire's" swan song of round the buoys racing. She went out in style finishing a close third, only 5 points out of first after a week's racing. Many great yachts are shown racing at close quarters.
Caribbean Compass rates this DVD the best record of the great regattas from the golden years of Caribbean yachting.

Don Street's videos first came out in the 1980s as  VHS tapes. Then they were transfered to DVDs. Now they are available from TheSailingChannel.TV as Digital Downloads, Streaming Rentals, and included with our subscription service, Sailflix.com. And Don's videos are still available on DVD if you prefer.

For the first time, TheSailingChannel.TV is offering all five Don Street sailing videos in one economical package:

Available through Vimeo On Demand as Downloads and Streaming Rentals. Enjoy online viewing everywhere there is a Vimeo App: computer, tablet, smart phone, smart tv. When you buy a download you also get unlimited online streaming. Also available on DVD and with a subscription to Sailflix.com, our streaming service that gives you access to our entire sailing video library.

Transatlantic with Street from SailFlix on Vimeo.

This documentary was made by Gavin Shaw in 1985 using a small handheld camcorder. Everyone said it was impossible to make a viable video with a camcorder, but over 11,500 copies have been sold -- and it is still selling strong. Available on TheSailingChannel.TV.

Available through Vimeo On Demand as Downloads and Streaming Rentals. Enjoy online viewing everywhere there is a Vimeo App: computer, tablet, smart phone, smart tv. When you buy a download you also get unlimited online streaming. Also available on DVD and with a subscription to Sailflix.com, our streaming service that gives you access to our entire sailing video library.

For nearly forty years, Don Street made annual Atlantic crossings sailing to and from his home in Ireland to the Caribbean island of Antigua. He auditioned sailors for his crew and passed down the bluewater sailing skills he had learned from previous generations of old salts along with his own experiences. Transatlantic with Street is the result of such a voyage. For crew member Gavin Shaw, this was his first transatlantic passage. A high level ad executive in the UK, Gavin obtained a state-of-the-art, small 3/4 inch video camera from JVC and shot one of the first sailing documentaries on video. Unfortunately, his original edit master one-inch tape degraded over time, and we are left with a VHS copy – now the only master tape from which we made this digital version.

ABOUT THE VIDEO SHOOT

The JVC video kit used to capture the raw footage for TwS was actually based on standard half inch VHS tape in compact cassettes. It wasn't even SVHS which didn't exist at that point, nor was it 3/4 inch which would have been too unwieldy and power hungry on Iolaire. The camera was a single tube Saticon, about the size of a standard paperback. It was connected by a short cable to a small chest mounted VHS recorder a couple of inches thick on an A4 footprint. It never missed a beat the whole way across despite the very wet and salty conditions on Iolaire. JVC had engineered both units pretty well but I doubt they would have made it without the storage arrangements we used. Everything lived in an airtight flight case with a large muslin bag of desiccating crystals which was recharged every day as the oven was cooling after breakfast.

This heavy weather sailing video with Don Street, legendary sailor and author, explains the preparation and tactics you need to take on boisterous seas. From the Sailing Quarterly Video Magazine library.

Available from Vimeo On Demand as a Download and Streaming Rental. Also available on DVD.

Available on TheSailingChannel.TV, this how-to sailing video is hosted by veteran charter skipper and sailing author, Don Street. It includes a treasure trove of anchoring & docking tips that will make your cruising safer and more comfortable. In Vol. 2, Don demonstrates anchoring techniques; ways to prevent chafe; instructions on handy knots and whippings; methods to get you afloat when you go aground; and shorthanded docking.

Available from Vimeo On Demand as a Download and Streaming Rental. Also available on DVD.

Available on TheSailingChannel.TV. Filmed in Martinique aboard Iolaire, Don Street's 46 ft engineless wooden yawl. Master sailor Don Street teaches you and your crew everything you need to know about sailors' knots, line handling and throwing in just 50 minutes. Don has decades of ocean sailing experience. Check him out at street-iolaire.com.

Available through Vimeo On Demand as a Download and Streaming Rental. Enjoy online viewing everywhere there is a Vimeo App: computer, tablet, smart phone, smart tv. When you buy a download you also get unlimited online streaming. Also available on DVD.

Available on TheSailingChannel.TV. A one hour award-winning documentary which lets you share the intense sailing action aboard Don Street's 80 year old, 44 foot, engineless yawl, "Iolaire" during Antigua Sailing Week, 1985, Iolarie's final appearance in one of the world's top sailing events.

Available through Vimeo On Demand as a Download and Streaming Rental. Enjoy online viewing everywhere there is a Vimeo App: computer, tablet, smart phone, smart tv. When you buy a download you also get unlimited online streaming. Also available on DVD. 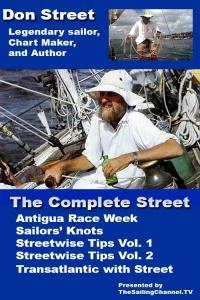 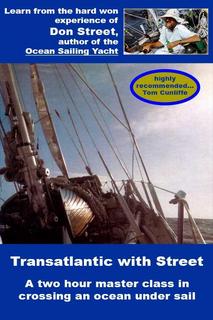 Cross an ocean in 2 hours 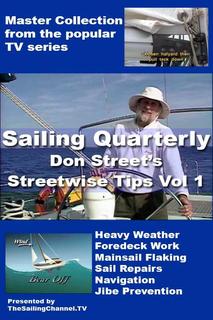 Street shows you how to handle it 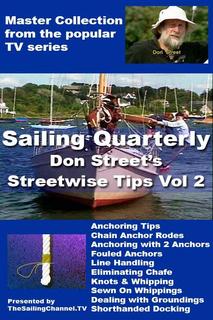 See how Street does it, 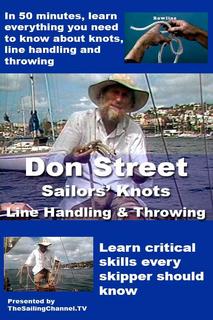 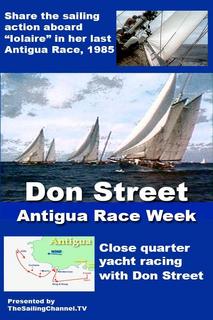 The golden years of